Los Perez is nestled in the countryside, very tranquil yet only 20 minutes drive from the cultural and historic city of Cartagena with the Naval base, museums, marina and wonderful architecture yet also super for shopping in little boutiques or wandering around the large shopping malls. Mazarron in the opposite direction, has many beaches, beach bars and a newly built Marina which is full of multi-cultural restaurants.

Cartagena has been prized since Carthaginian times. Thanks to its strategic position on the Murcia coast, it has been inhabited by several cultures which have left their mark on its artistic heritage. A tour of the place and its museums will draw you into the history of a city closely tied to the sea.

You will find within, a wealth of history and beautiful architecture. If you explore the port area you will find a mixture of old and new. The large naval base occupies a large area and throughout the city, the importance of the port will become evident with numerous buildings belonging to the navy, as well as a good naval museum. You must see the Naval Headquarters, Artillery Headquarters, Dockyard Gate and the Midshipman School.

Cartagena has always been a major port, due to its unique position on the Mediterranean coast and you will see high on the hilltops, several forts and castles

Much of the historical weight of Cartagena in the past goes to its coveted defensive port, one of the most important in the western Mediterranean. Cartagena has been the capital of the Spanish Navy's Maritime Department of the Mediterranean since the arrival of the Spanish Bourbons in the 18th century. As far back as the 16th century it was one of the most important naval ports in Spain, together with Ferrol in the North. It is still an important naval seaport, the main military haven of Spain, and is home to a large naval shipyard.

Over recent years many of the important buildings in the city have been restored. Indeed, to this day the work continues. There are numerous churches, palaces, government buildings and several good museums worthy of a visit.

There are plenty of parks and squares to rest in, surrounded by good restaurants and bars and you will almost certainly find life here very slow and easy going.

Much of Cartagena's Roman history has long gone, however there are sites, such as that under the current bullring that have been excavated. The bullring was erected in 1854, over the Roman amphitheatre. All well worth a visit. 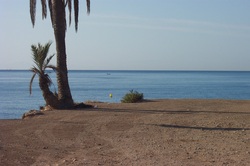 Mazarron is broken up into small districts, with the main tourist areas being along the coastal region, including Puerto de Mazarron Bolnuevo, Playasol, Playagrande and Bahia.
However, moving inland into the municipality  and the landscape turns into vegetation and agricultural land, where tomatoes,  cereals and citrus fruit are major produce for Mazarron.
Further inland you come to the Sierra, a mountainous and unpopulated part of the municipality, where the land is more arid and mountainous. The beautiful forest reserve of Coto Fortuna is a beautiful area for those who enjoy rambling and outdoor pursuits.

If you are interested in exploring the history and culture of
the region then you are in luck as Mazarron is rich with archaeological remains and ancient buildings, which tell the tale. Interesting sites include the Old Alum Factory, the Velez Castle, dating back to the 15th century, the old Mazarron Mining Reserves, the 16th century San Andres Church and the Roman Milestone, datingback from the 3rd century, there are indeed much more historical sites of interest..

Beaches
The area boasts 35 kilometres of fine sandy beaches, many which have been awarded the blue flag for cleanliness and facilities.

During the summer months you can enjoy live music most evenings on the Paseo (promenade) in Puerto Mazarron.

In environmental terms Murcia is halfway between
Africa and Europe which helps to explain its variety of landscapes and habitats.
In a relatively small area one can pass from mountains to arid, steppe-like, plains, to the forests to the rich meadows and finally to one hundred miles of coastline.

Also The Gun Batteries at Cabo Tinosa, La Azohia, between Mazarron & Cartagena are well worth a visit. Situated 218 metres above the sea on a rocky cliff top.
These 2 battery emplacements manufactured by Vickers in Barrow in Furness are a great attraction, whether you have any interest in military history or not, and are a great place offering stunning views, interesting architecture and fabulous great guns which make wonderful holiday
photographs.